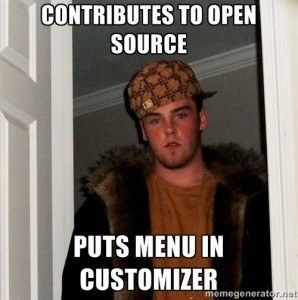 I fail to see what’s causing such an uproar in the WordPress community.

There are a number of arguments for and against the latest decision by the WordPress core team to integrate the Menu Customizer plugin into the core functionality of the WordPress 4.3 release.

I’ve been monitoring Facebook and a few influential bloggers and most of the arguments can be summed in one of the following categories.

Arguments Against The Menu Customizer

Here’s What The Dev Team Says

This is a direct quote from the plugin page in the repository.

Menu Customizer fixes some significant problems with the existing approach to menu management in core, particularly around scaling. Note that its scope carefully excludes fundamental changes with the menus paradigms; rather, the goal of this project is to modernize the menu management experience so that the UX can be iterated on more reasonably. Most importantly, Menu Customizer allows you to live-preview changes to your menus before they’re published.

In addition to what’s been mentioned above the WP core team has long been pushing for theme developers to use the Customizer instead of old-fashioned Theme Options page.

This is a positive step forward in eliminated the confusion that many users experience when switching from one theme to another and the options are all over the place.

Changing themes shouldn’t mean you have to relearn your CMS every time.

My Take On The Whole Fiasco

While I wholeheartedly disagree with those folks who’s argument against the Menu Customizer is simply “change is bad, me no like change.”

I  agree that the Menu Customizer in its current iteration has some fundamental flaws.

Arguments #2 and #3 against the Menu Customizer are very compelling from a UX point of view.

Fragmenting a user interface, hiding options when it simply isn’t necessary and drastically reducing the user’s work-space is never a smart move.

On the other hand, I agree with the hard-working developers who are putting their time and effort into the Menu Customizer when they stress the importance of live-preview changes to the menus.

WordPress menus in the current state are clunky and difficult to organize. I can’t tell you how many times I’ve found myself frustrated trying to move pages into sub-menu items only to have the entire order of my menu thrown completely out of whack.

Also, I never quite understood why Menus was placed under Appearance, it should stand as its own top level category.

Change Is The Only Constant

We should be embracing changes in WordPress and contributing to its evolution. A lot of the talk around the Menu Customizer has not only been unhelpful, but also completely dismissive without adding any value or new ideas on how to best solve the menu problem.

A Better Solution Is Needed

The problem isn’t just the fact that they are putting menus in the Customizer.

The WordPress Customizer in and of itself is inherently flawed.

Rather than a paneled sidebar, I’d love to see the WP core team re-imagine the way the Customizer itself behaves entirely.

The Customizer’s strongest feature is the live preview feature.

Imagine a Customizer who’s options only appear when you click on an editable element. Perhaps one day we will have a beautiful user interface that gets out of the way when it’s not needed, and enters the fold when it is.

Perhaps we are at the precipice of WordPress turning into an open source version of Wix or Squarespace?

Maybe the Squarespace-ization of WordPress idea makes some people uncomfortable.

Why am I unimpressed by the Customizer hate?

We’re only in the beginning stages of what will one day be WordPress 5.0 and beyond. Software changes, iterations occur, and things are perfected over time.

While it’s not ideal right now… The WordPress core team has delivered incredible value for over a decade and they will have plenty of time to iron out the kinks in the future.

Five years from now we’ll look back on this debate and I think we’ll recognize it was a rough infancy for the Customizer, but one day it will mature and become a seamless part of the WordPress.

Note: Sometimes I post affiliate links for awesome products that I use and love and will earn a commission if you purchase through my link. If you think the information I provide is useful please use my link to make a purchase thank you.
Back to top